The Advent of Internet Censorship in America 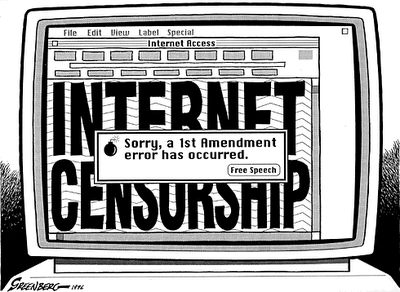 Question: What does it take to get bitter rivals, Google and Facebook – the two most popular and powerful entities on the planet, to put aside their differences and join forces for a common cause?

Answer: Internet censorship in America, or the threat thereof.

Unless you’ve been living under a rock for the past month or so, you’ve no doubt been hearing on TV news, and reading in newspapers and on blogs about a controversial new bill called SOPA (the Stop Online Piracy Act).

The Stop Online Piracy Act (SOPA), also known as H.R.3261, was introduced in the United States House of Representatives on October 26, 2011 by Representative Lamar Smith [R-TX] and a bipartisan gróup of 12 initial co-sponsors. The aim of the bill is to help U.S. law enforcement and copyright holders fight online transmission of restricted intellectual property. (Source: Wikipedia)

New bills that police the Internet get passed all the time, so why all the commotion over this bill? Because this particular bill has serious first amendment ramifications – a potential encroachment of free speech. Even famed attorney and constitutional law expert Floyd Abrams, a paid advocate for supporters of the bill, admits SOPA would censor protected speech. In a letter sent to House Judiciary Chairman Lamar Smith and Ranking Member John Conyers, Abrams writes:

“Regardless of the particular standard or definition of foreign infringing sites, court-approved remedies under the Stop Online Piracy Act may result in the blockage or disruption of some protected speech. As discussed above, the bill provides a range of injunctive relief…, with a court making the final determination as to whether and how to craft relief against a website operator or owner or third party intermediaries. When injunctive relief includes blocking domain names, the blockage of non-infringing or protected content may result.” (Source: Techdirt.com)

Opponents of the bill (including yours truly) think the bill would fundamentally change the Internet as we know it – and not for the better. Let me explain.

The idea behind SOPA came about as a way to try to eliminate piracy on the Internet. According to a recent article on PCWorld.com, online piracy costs the U.S. economy $58 billion in losses every year, including 373,000 jobs. And while I agree online piracy is indeed a serious problem that needs to be addressed, the excessive and invasive measures contained in SOPA are simply the wrong approach. The bill would unduly and randomly grant content owners the power of censorship.

That’s right, if SOPA were passed, content owners would have the power to obtain court injunctions to block access to certain websites that were simply considered “copyright infringement friendly.”

For example, if my website, Free-Marketing-Tips-Blog.com happened to have content that could be interpreted as “piracy-friendly,” my domain name could be blocked so it would be inaccessible by visiting my URL address. What the bill can’t do, however, is block numeric IP addresses. So if I were indeed a pirate, you could still access my website, or any other censored website for that matter, if you had their IP address. And while SOPA might discourage casual pirates, more determined and sophisticated hardcore pirates would likely not be dissuaded – at least not to any significant degree.

Why? Because the business of piracy is much too lucrative to be deterred by such measures. It’s sort of like burglar-proofing your front door… burglars will just come in through the back door.

So essentially, the bill would be ineffective at what it was specifically designed to do – eliminate piracy. But would likely be very effective at censoring any suspected websites – even if the offense is unwitting and something as minor as you or one of your friends posting a copyrighted image to your Facebook page.

Heck, even a seemingly innocuous comment in a blog post could be considered piracy friendly. How preposterous is that?

There is also a concern the bill would stifle critically important technical innovation and job creation by overturning existing laws that were catalysts for the technological boom of the last decade; which could prove damaging to an already fragile and slow recovering economy.

Add to the equation the fact the bill has such vague standards and sweeping language, and you can begin to understand why so many people are up in arms over the bill.

How strong is opposition to SOPA? According to an article on the blog PureVPN.com titled Protest Against SOPA Bill Reaches a Fever Pitch…

“An open letter against the SOPA bill was jointly written by the industry giants including Google, Facebook, Twitter, LinkedIn, eBay, Mozilla, Yahoo, Zynga and AOL. The letter addressed the congressional sponsors of the bill urging them to reconsider the measures and it appeared as a full-page ad in The New York Times on Wednesday.

Apart from this letter a lot of other websites are protesting against this bill in their own way. For example Reddit, Firefox and Tumblr drew broad black lines on their websites to protest against this proposed law. When a user logs in at Tumblr he gets to see that all user-generated content has been blacked out. When users click on the gray lines to investigate, a message appears which tells them about the bill and encourages them to oppose it. Reddit and Mozilla have censored their logos which click through to instructions for contacting representatives.”

Even the Vice President of the United States, Joe Biden has spoken out against the bill in a remarkably compelling speech on Internet Freedom.

At the time of writing this article, the bill currently sits in the House Subcommittee on Intellectual Property, Competition, and the Internet. It has yet to be introduced to the floor for a vote. A sham hearing on the bill took place on Wednesday, November 16, 10:00 a.m. in the House Judiciary Committee.

Why was the hearing a sham? Because present at the hearing were parties overwhelmingly supportive of the bill, including Pfizer, MasterCard and MPAA, while Google was the only party present allowed to voice opposition. Talk about a stacked deck.